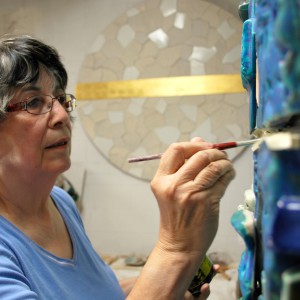 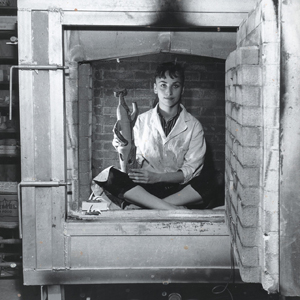 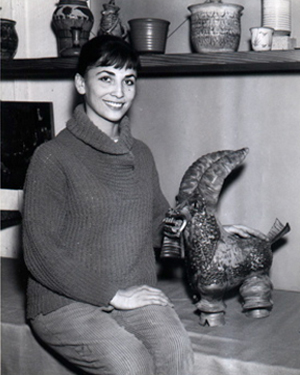 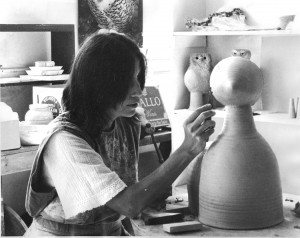 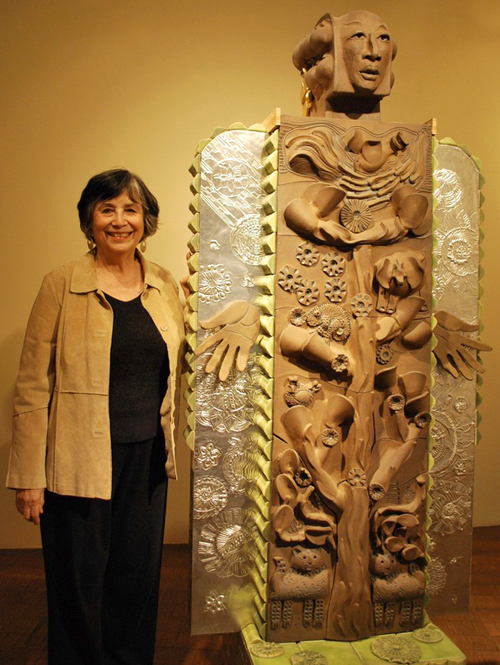 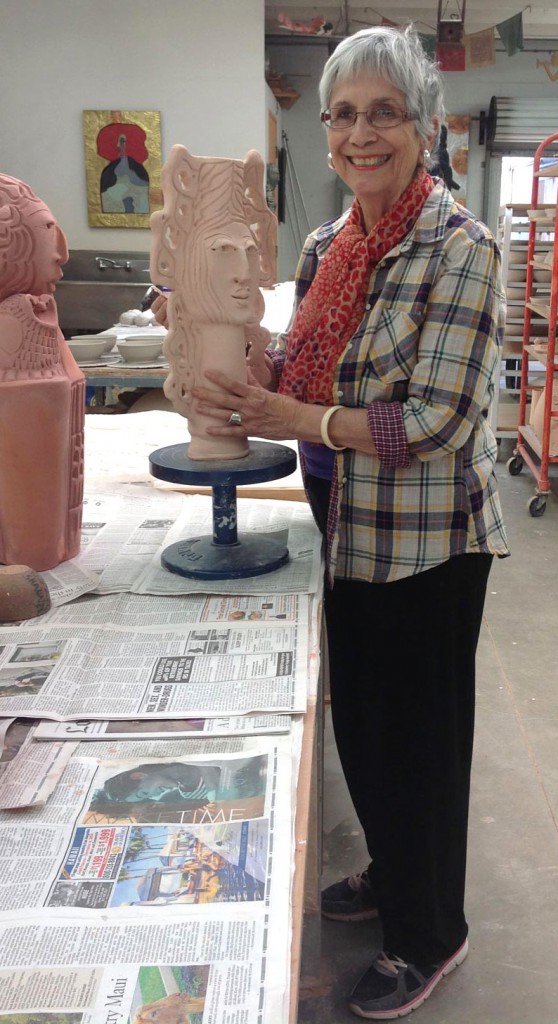 To survey the landscape of Dora De Larios’ creative vision, one must not only travel to cities around the globe where her large-scale architectural sculptures speak a universal language, but to the ancient past of all civilizations from which her inspiration springs.

Whether in intimate ceramic pieces or massive mixed-media commissions, De Larios strives to harmonize the animal and the spiritual, the earthly with the divine. Her artistic world is populated by mythological creatures and goddesses at once whimsical and fierece. The contrast between opposing forces is evident in her more abstract pieces as well, as when spherical mandalas are enclosed by squares.

It is no doubt De Larios’ ability to translate universal human dilemmas into mystical and transformative works of art that accounts for her international appeal. She is today one of America’s leading clay artists, with an impressive list of accomplishments ranging from place settings for the White House to a grand cement wall sculpture in Nagoya, Japan.

Though her art shows definite influences of her Mexican heritage, those who have been collecting her work for decades are just as likely to describe the figurative works as Asian, African or Greek. Her studies of world religions and ancient art at the University of Southern California, her travels around the world and her upbringing in ethnically diverse Los Angeles account for the unique cross-cultural influences on her artwork.

De Larios was born in Los Angeles to Mexican parents and raised in a downtown neighborhood near Temple Street surrounded by Japanese families that spoke Spanish. Her limited use of English hindered her verbal comprehension in school and probably contributed to her use of a visual vocabulary.

Her family’s frequent visists to Mexico were another major influence on her work. At the age of 8, her parents took her to the Museum of Anthropology in Mexico City where she was struck by the awesome power of the 24-metric-ton Aztec calendar stone. She felt profoundly connected to her Mexican ancestry and knew from that point on she would become an artist. Both Pre-Columbian pottery and monolithic stone sculptures played an important role in her decision to work in clay.

De Larios’ early life further informed the dichotomies in her world view. She grew up with an appreciation for both native Mexican mythology and Catholicism, finding the green mountains of her ancestral homeland as exalting as the stained glass windows and sacred sculptures of L.A.’s Romanesque cathedrals. These influences may be seen in her frequent use of gold leafing, polished and textured metals, imaginative portrayals of human and animal forms and her art’s ability to exalt and uplift the human spirit.

The artist’s formal training began at Dorsey High School and then the University of Southern California, where she and black student Camille Billops were the only minority art students. Her status as a Latina in an art world dominated by white males is reflected in her concentration on the exaltation of feminine forms.

After receiving her degree, De Larios took a 13-month trip around the world, where her academic studies of world religions and ancient art came alive and cemented her unique pan-cultural artistic vision.

“I began to see the patterns and similarities between myths in the various cultures,” De Larios recalls. “There were different names for the deities, but they served the same purpose. They were positive or destructive forces.”

The year-long trip exposed De Larios to other people’s thoughts and monuments, the contrasts between rigidity of belief and freedom, the temporary and the eternal, mass poverty and great cultural wealth. “It showed me how limitless thought is,” she says.

Returning to the states, De Larios set up a studio with five other artists. From the start, her private art sales became sell-outs. From 1959 to the present, she has been featured inmore than 50 one-person gallery shows, group invitational shows and juried museum exhibitions across the U.S., including the Museum of Contemporary Crafts in New York, the Renwick Gallery in Washington, D.C., the Craft and Folk Art Museum in Los Angeles and the Los Angeles County Museum of Art.

Her public and private architectural commissions are equally impressive. Most rewarding to the artist was being chosen in 1979 by the City of Los Angeles to create a 6’x26’ cement mural to present as a gift to Nagoya, Japan, L.A.’s sister city.

Among the most impressive of these incredibly diverse architectural works are a 6’x30’ blue porcelain seascape for the new Montage Resort & Spa in Laguna Beach, a 36’x20’ monolith in cast cement, tile and textured bronze in Pasadena Villa Parke entitled “Home to Quetzalcoatl,” three “Koi Goddesses” in the fountains of downtown L.A.’s Westin Bonaventure Hotel, a 7’x40’ porcelain and gold leaf wall sculpture in the lobby of the Anaheim Hilton, an 11’x20’ stainless steel and illuminated plexiglass piece given to the City of Carson by Nissan Motors and a 10’x21’ brass gateway at the entrance of Chinatown’s Bamboo Plaza.

Other important pieces for which De Larios has received widespread notice are smaller and more personal. A series of stoneware masks that reflect a transitional period of growth in her life earned numerous awards and accolades in magazines and books.

De Larios has been recognized as one of America’s most important clay artists in “Who’s Who in American Art,” “Who’s Who in America,” “Biography International,” and “Who’s Who of American Women.” She has taught ceramics at USC and UCLA and served as a representative from the American Craft Council to the World Craft Congresses in Oaxtecpec, Mexico; Kyoto, Japan; and Vienna, Austria.

Despite her 40 years of achievement in the arts, De Larios remains a humble servant to her vision. She sees her work as a divine gift with which she has been blessed – – a lifetime of hard work coupled with the childlike joy of discovery. She is constantly in awe of the natural processes that allow her to create, from the earth’s churning of rocks and minerals into clay and glazes, to the flow of divine inspiration that transforms the clay into artwork through her hands.